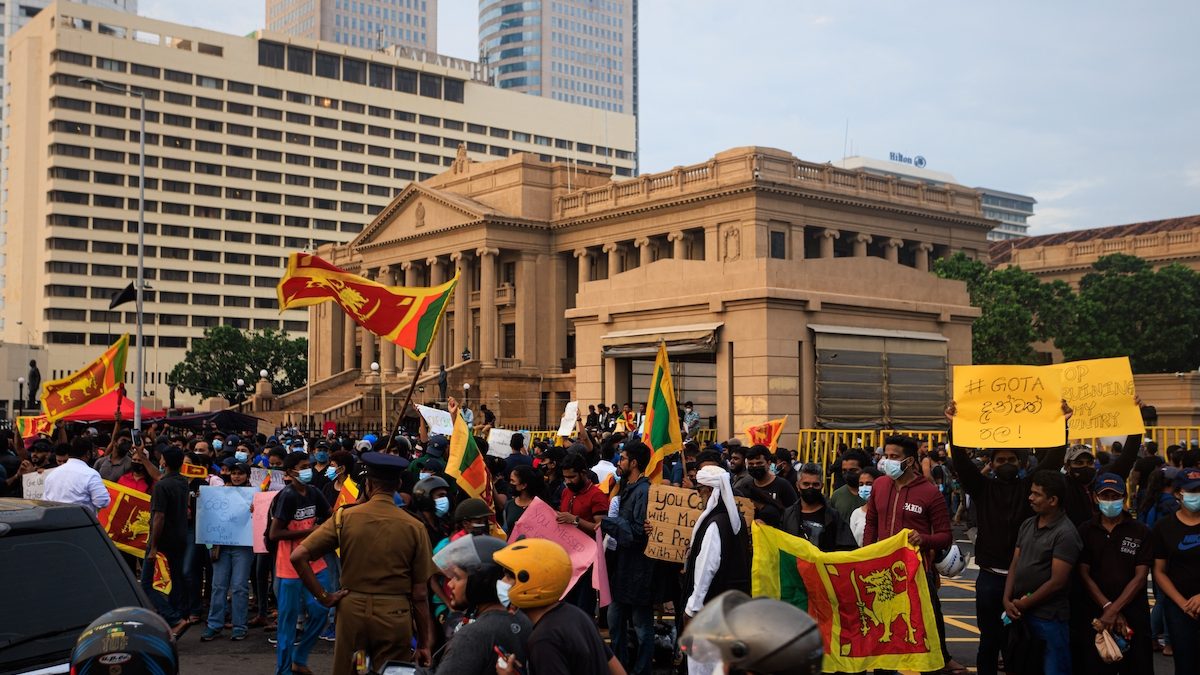 Protests in Sri Lanka have led to the fall of the president of the country and a state of emergency with the military empowered to detain people, stop public gatherings and search premises. This follows protesters occupying the residence of the president, swimming in his pool and relaxing in the luxurious rooms.

After the occupation of his residence, President Gotabaya Rajapaksa fled the country on a military jet to safety in the Maldives. His brother, a former finance minister, also left Sri Lanka, seemingly ending the family’s power in the country. The president and his government are blamed by the protesters for the economic crisis in Sri Lanka, which has resulted in power cuts as well as inflation and shortages of essential goods.

The economic crisis is not unique to Sri Lanka, but the effects have been felt in this country for many months already. Fuel supplies are limited as a result of the international supply situation, largely driven by the war in Ukraine. Inflation is a problem across the world with levels of around 9 per cent in the UK, USA, and major European countries. However, in Sri Lanka annualised consumer price inflation is estimated to be over 50 per cent and hence is having a harsh and immediate impact on the cost of living for ordinary people.

Not only does Sri Lanka have difficulties with inflation and the supply of essential goods, but the country has huge debts. China is a major creditor having provided loans for major infrastructure projects such as $155 million for the Puttalam/Norochcholai Coal Power Project that generates around one third of electricity in the country. The reliance on coal powered energy is worsened as a major supplier to Sri Lanka is Russia.

In addition, Sri Lanka owes China $8 billion related to construction of the Hambantota port, strategically located on the southern coast of Sri Lanka. After struggling to repay the debts, the Sri Lanka government signed a 99-year lease for Chinese state-controlled China Merchants Port Holdings company to control the port and surrounding 15,000 acres.

The mismanagement of Hambantota port has caused local anger in Sri Lanka after aides to former president Rajapaksa have been accused of receiving cash from the project during the 2015 presidential election. Use of Hambantota by China has caused international anxiety due to concerns that as part of the debt repayments China could use the port as a military base. Illustrating this risk, Chinese scientific research vessel ‘Yuan Wang 5’ will visit Hambantota port in August for a week reportedly to conduct satellite control and research in the Indian Ocean Region.

China has responded to suggestions that it has caused a “debt trap” in Sri Lanka, with Chinese Foreign Ministry spokesman Zhao Lijian saying recently that, “The China-Sri Lanka practical cooperation has always been led by Sri Lanka with scientific planning and thorough verification with no strings attached”.

The elephant in the room is not China, but India which has historically close ties with Sri Lanka but a strained relationship due to Sinhalese nationalist concerns regarding excessive Indian influence. The current crisis in Sri Lanka may cause better relations between the two countries, helped by recent assistance from India that includes provision of a major credit line as well as shipments of food, fuel and fertiliser. This help from India will likely influence Sri Lankans to have a more favourable perception of their close neighbours in India, to the detriment of China.

The Asia Scotland Institute will hold a meeting to discuss the situation in Sri Lanka with experts who can project what the future is likely to hold. Stay tuned to our events schedule to hear more about Sri Lanka.